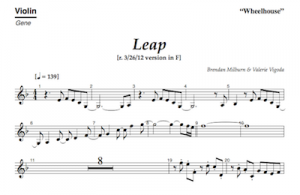 This was a very intense day. In order to make all the structural changes we discussed with Lisa and Meredith, we got up at 5 AM and worked for several hours…then we tried out the morning’s ideas in the rehearsal space before Lisa and Meredith arrived. Assistant director Jeffrey Lo printed out entirely new scripts for us (the number and volume of changes necessitated this – sorry, trees of Menlo Park – it won’t happen again!), and we limped through the new structure.
It’s working! It’s better!

Highlights of the changes include: moving our original opening song “Open Roads” to the point slightly later in the show when we actually start driving the RV for the first time…putting in a different opening number, which is a repurposed version of our 2003 road song “Can You Believe” and is working like a dream in that position…cutting our old “Surfing the Couches of New York City” song, which just wasn’t needed or landing that well (don’t worry, fans of that tune – we will record it soon for posterity!)…and cutting the old “Lucky Day” office song but keeping the best part of it – which is the fun of all of us using office supplies as percussion – as rhythms for the song “Take on the World.”

After another long set of Lisa/Meredith notes and lively 3-hour discussion based on the new limp-through, we now have another great list of improvements to make. This is extraordinarily exciting. One more song is getting the ax (to be revealed tomorrow)…and a big challenge for the morning will be to try to combine Gene’s ballad “Leap” with a reprise of my favorite song from the show, “We Have Come This Far.” If one can lead into the other and then they converge, we think it will be a very powerful moment.

In the late afternoon, the wonderful Bryan Lanser from Muse Research stopped by to lend Brendan a Receptor for the week (an incredible piece of gear which provides amazingly beautiful keyboard sounds), and then took us out in the pouring rain to dinner at Pluto’s in Palo Alto. It was great but we were so exhausted that we were back at the Oakwood asleep by 9 PM.