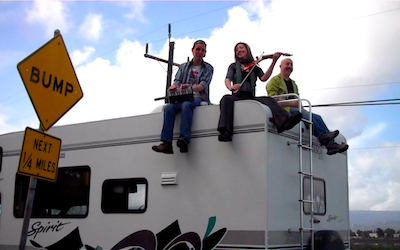 Another very intense day with lots of rewrites…but it was broken up by a fun outdoor photo shoot for Ev Shiro, art director of TheatreWorks. Ev’s neighbor Ron owns an RV, and lent it to us for the morning.

The official photos (by the excellent Mark Kitaoka and Tracy Martin) will be released soon – the one shown here is from Val’s Flip camera, taken by Tanya Finkelstein.

Climbing up to the high roof of the RV, we learned that both Val and Gene are a bit afraid of heights, whereas Brendan is fearless. (In a related statistic, here’s the lifetime GrooveLily broken-bone tally: Val – 1. Gene – 0. Brendan – 17.)
No bandmates were hurt in the taking of this photo.

Back at the rehearsal studio, another song bit the dust: “This Is Not The End.” The “Leap”/”We Have Come This Far” reprise combo idea is a winner, and we are all thrilled with it. Combining Brendan’s lowest moment in the show, after the song “Idea Man” (where he sits and for the first time does NOT play an instrument), with Gene’s epiphany moment of taking an emotional risk (where he now accompanies himself simply, solo, on the keyboard), is turning out to be a powerful choice by our director. We now think we are close to the right “macro” structure, in terms of number of song moments and dramatic arc of each character…and the next step is to get more “micro,” zeroing in on book moments and connective material to achieve a finished draft by the end of the week.

My assignment for tomorrow is to go back through old travel journal/diary entries and find ones relevant for possible inclusion in the show. It’s at once nostalgic and fun to do this, and also painful and embarrassing…but the whole point is to dive in and not shy away from any of it. Onward!