Hello friends – I have been almost completely offline for nearly two months (since doing STRIKING 12 in NYC Christmas Eve)…and now I’m back with news to report, as well as enthusiasm I cannot contain. (!!!) Here’s what’s been occupying me so intensely:

1 – on January 11, I started rehearsals for the world premiere production of the show I may be more passionate about than any other: ERNEST SHACKLETON LOVES ME, which will start previews April 12 and officially open at Seattle Rep, under the auspices of Balagan Theatre Company, on April 18. (Have I mentioned how excited I am about this??) Brendan and I, along with the brilliant and hilarious Joe DiPietro, have been working on this piece off and on for about five years – first as a solo show for me to perform, and then in its much better version as a two-person musical. (As our astute and ingenious director Lisa Peterson said, in a show featuring Ernest Shackleton you have to SEE Ernest. How right she is.) 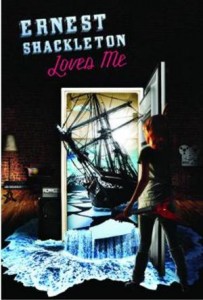 It feels like all the stars are aligning to make this happen the right way: various random delays made it so that we are now premiering the show in the 100th anniversary year of the start of Shackleton’s historic voyage, so that Shackleton awareness is at an all-time high; Lisa’s demanding schedule made it so that we have a nearly-2-month hiatus between rehearsals and tech, so that we can fit in some rewrites and improvements (and banjo practice!); the original venue fell through, so that we are now at the much-better-for-us gorgeous, intimate-yet-grand Leo K Theatre at Seattle Rep, an ideal space for our premiere.

Matthew Kwatinetz, impassioned theatre revolutionary, is our lead producer, bringing together vast numbers of disparate pieces and personnel to make this happen for real. Wade McCollum, chameleonic and transcendent performer whom we have adored since he played Woody in our first TOY STORY workshop, is my co-star and it is thrilling to share the stage with him.

We rehearsed like mad at ACT in downtown Seattle, and ended our initial Seattle stint, just as the city was erupting with joy over the Seahawks’ Super Bowl victory, with 3 workshop performances February 2, 3 and 4 (fully staged, but with no tech: meaning there was tape on the floor instead of platforms, lots of piano playing by our excellent music director Ryan O’Connell instead of full orchestrations, and a descriptive speech by our director instead of video projections). 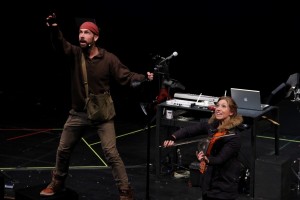 I don’t think I’ve ever stuffed so much information so fast into my brain and body before; probably because I’ve never done quite as much movement/acting/blocking as this while playing – for example, leaping from ice floe to ice floe while playing a hoedown…it’s been hugely challenging, immensely inspiring, and one of the best things I’ve ever done. And it’s gonna be even better in April. 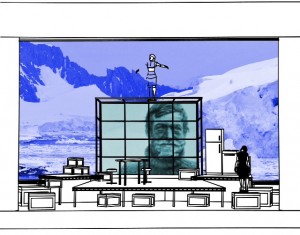 sketch of the set by scenic/video designer Alex Nichols

And Robert Neblett wrote a wonderful American Theatre article for the February 2014 issue, called “The Geek Shall Inherit The Stage,” featuring SHACK prominently!

KAT: I wrote the score
For this video game.
It’s a game that hurtles geeky boys through space,
Pasty and pimply and hunched-over teenagers
Paying my rent and my huge student loans

And instead I accompany blow-ups and bleeps
And the blast of an alien jet
Reality sucks.
It sucks.

So laments composer Kat, the protagonist of the new musical Ernest Shackleton Loves Me by Joe DiPietro, Brendan Milburn and Valerie Vigoda, premiering in April under the auspices of Seattle’s Balagan Theatre. This lyric, from the show’s opening number, evinces a familiar cultural stereotype of the geeky teenage gamer—someone who is divorced from the real world and submerged in the virtual cyberscape of high-tech media. Kat eventually learns to embrace the “300 beta-test boys” who vote her music their favorite component of the game “Star Blazers,” ironically unaware that in her current state of existence—vlogging from her freezing apartment that “reality sucks” while hunched over a Frankenstein-like makeshift music studio cobbled together from the corpses of keyboards, reel-to-reel players and electronic samplers—she is just as isolated as her nerdy fans.

Read the rest of the story here.

2 – on January 16 (in between music rehearsals and staging rehearsals for SHACK), I flew to Ohio for a longstanding weekend of solo concerts. Those of you who have known me for a while know that Brendan and I have been working together to launch this concept for over three years now – off and on, just like all our projects – but in this case the sheer number of hours of brainstorming, planning, preparation, arranging, learning the quirks of the computer program Ableton Live, troubleshooting, figuring out the right stage setup, finding the right pedals, and getting the whole thing to work has been staggering. People talk about the 10,000 hours needed to achieve mastery at something…and in this case it feels like we’ve put in another 10,000 just trying to master this wacky violin-and-vocal-looping situation, which basically involves a constant collision of left brain and right brain. It’s a whole new way of thinking about music…and I am IN LOVE WITH DOING IT!

It makes me feel phenomenally, powerfully alive to be able to stand alone on stage and create an entire evening this way…and the relatively new part of that for me is the ability to take joy in all of it – no matter what happens. I used to beat myself up mercilessly if I made a mistake – despite years of hearing (and dismissing) my bandmates’ smiling motto, “wrong and strong!!” But now I fully believe. Authenticity and imperfection – these are what I am all about these days – and I am having more fun as a performer than ever before, and so are the audiences. I had a truly spectacular time in Ohio that weekend, at Springfield High and Clark State PAC in Springfield, and at the Community Arts Center in Fairfield..and can’t wait to share more of these solo concert experiences with all of you. 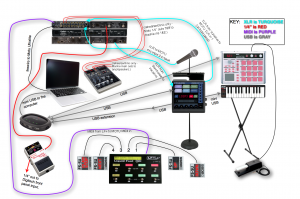 diagram of my gear

3 – on February 5, right after the third ACT workshop performance of SHACK, I flew with Brendan to Birmingham, Alabama to do five Milburn & Vigoda concerts at the extraordinary Red Mountain Theatre Company. Led by artistic director and force of nature Keith Cromwell, this thriving theatre in downtown Birmingham is making big things happen. We have never before had the pleasure of performing our songs along with NINETY incredibly well-trained, polished young singers – and they absolutely blew us away. Rock solid harmonies, great sound and attitude – and many of these kids are starting to go on to the top musical theatre programs in the country. We had no idea Birmingham was such a hotbed; but thanks to this remarkable theatre and these remarkable people, it is. We got to delve deep into our catalog, doing different songs each night…and the kids sang their hearts out on “The Claw” from TOY STORY,  “Snow Song” from STRIKING 12, and “Uppity Up,” our favorite cut-from-a-Tinker-Bell-movie tune. 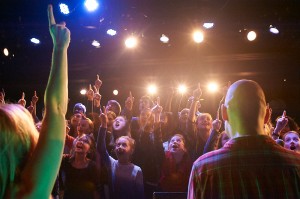 So it’s been quite a whirlwind – and I am happy to be home again. After not having any brain space whatsoever for anything outside my own purview, I am now excited to peek back into the online world and reconnect. I’ll be home during March, and then hit the ground running in Seattle on April 1.

I do have one more solo concert coming up – I fly out during a day off of SHACK tech, to the aptly named Defiance, Ohio on April 8. And then it’s all SHACKLETON, all the time, exploring the Seattle Antarctic through at least the first week of May.

See you out there, or in here…
love,
Val

10 Responses to The past two months: SHACK, solo concerts, Birmingham