Okay people: I’ve gained 15 pounds, and it’s time to get serious. I’m posting publicly about it for extra accountability and to see if I can help support anyone else facing similar issues. At the risk of oversharing, I think this is an important conversation because LOTS of my contemporaries, particularly the female ones, are battling the insidious creeping weight gain; so I say why not battle it together? 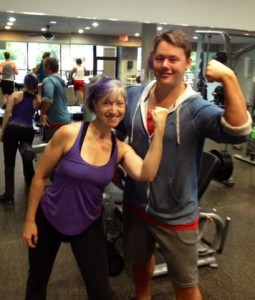 going into battle with Ian

My brief backstory: before age seventeen I was a mostly sedentary, rather chunky little violin player. Then in college, Army ROTC whipped me into shape for the first time in my life; it was a revelation to have so much more strength and energy than ever before, and to feel physically powerful as I never had; and I became irrevocably hooked on working out. Since then, I’ve generally been pretty healthy and fit, with small ups and downs in weight, but basically I’ve hovered around 117-118 pounds. At my most hard-bodied and svelte, I was a teeny bit lighter (around 114) – but I’ve been happy and feeling great anywhere up to about 120.

Last year, that thing that women rarely mention, but which every woman goes through, hit me EARLY and hit me hard: I’m talking, of course, about the demon menopause. (I just accidentally typed “meanopause,” which actually seems pretty accurate. This sucker is MEAN.)

I won’t go into all the myriad details now, but the one pertinent fact to this post is that I suddenly found myself getting heavier.

No problem, I thought – I’ll just cut out the cocktails, cut out the dessert, step up the workout intensity a little, and I’ll be fine just like always.

Sadly, my tried-and-true tactics NO LONGER WORKED. At all.

I was running, doing intervals, stairmaster, pushups, situps, lifting, lots of hot yoga, everything I knew how to do…and just continued getting thicker around the middle.

I’m now 133 pounds, and although this is far from a tragedy and I am still basically human-shaped, not obese by any stretch and not considered problematically unfit, I have been feeling sluggish and uncomfortable in my body. My body fat percentage is 29% (which is not horrible, but too high for ideal health: 22% would be much better), and I yearn for the lightness and energy I used to have.

Enter Ian A. Lane, the terrific young trainer I posted about in my 5 days of gratitude last week. He has decided to start specializing in working with women, and I’ve decided to chronicle my journey with him over the next 3 months, in the hopes not only of helping myself maximize my results, but also to help others who are in the same boat.

Tuesday’s workout – 3 sets of each of the following, done in a circuit:

1 – elbow circle planches on stability ball (you balance on your elbows on the ball, with legs outstretched and apart on the floor, tighten your whole body and make circles with your elbows) 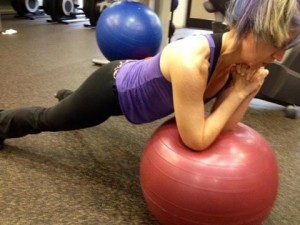 2 – stability ball hip thrusts (neck and shoulders on the ball, legs bent 90 degrees, and extend upwards using glutes as much as possible) 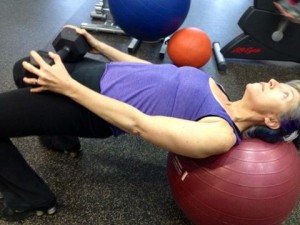 3 – overhead shoulder press with bar bell (stand with elbows under wrists and body tight, one foot forward, and push the weight up explosively, then slowly lower) 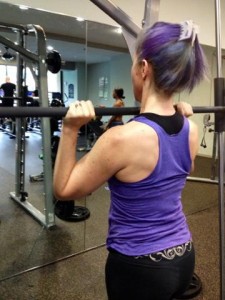 4 – pistol squats holding bar bell (using bar bell for stability, extend one leg out and squat with the other, keeping weight on heel and making sure knee doesn’t migrate inward – going slowly in both directions). 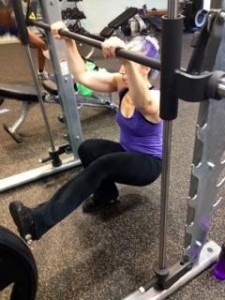 Ian’s very efficient style calls for slow movements and complete muscle fatigue, and plenty of rest in between lifting workouts. I’ll be back with him on Friday, and in between will do an easy run, and a Bikram yoga class.

The nutritional guidelines are: plenty of protein and vegetables, no sugar or carbs ESPECIALLY IN THE MORNING, when cortisol levels are highest and if you spike insulin then, fat cells most easily become “differentiated” and contribute to weight gain. (So I’m not even doing my usual “a little sugar in my coffee can’t hurt, right?” My plan is to have really good coffee, with real half and half, and if I must, a few drops of stevia but I’m going to try to embrace the actual taste of the coffee + cream.) One day a week of “refeeding,” which means having carbs and sugar to reset metabolism – not sure which day that will be yet.