It’s all about the science (oversharing #5): attention must be paid, and often stood at.

All right, people – this is so crucial that it warrants ending a sentence with a PREPOSITION (see above).

Part 1 – Attention must be paid 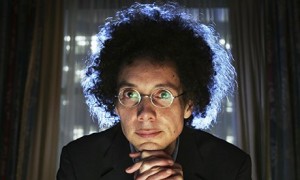 The halo of Malcolm Gladwell’s hair.

As a former sociology major, I have always been keenly interested in why people do what they do. (I chose not to be a music major in college, even knowing that I wanted to be a musician – because I was so fascinated with what makes humans tick, and I felt the study of human behavior was actually really applicable to songwriting. If I were NOT a musician, I would want to be Malcolm Gladwell. Or at least have his hair.)

I’ve heard for years and years that keeping a food diary is a really valuable weight loss tool. And I always pooh-poohed it, thinking “yeah whatever – I’m totally aware of what I’m eating, and I don’t need to write it down.” It’s the many-times-proven “that thing that applies to all humans? That weakness every other person on the planet has? Not me!” truth about the perverse way we all think. 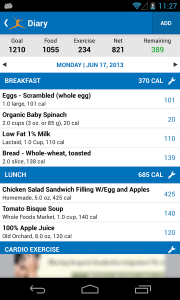 It’ s My Fitness Pal! I don’t actually eat much bread anymore – that’s a fallacy. Nor apple juice. Wait! You’re not MY fitness pal!

So I went in to see my trainer Ian on Friday, feeling generally good and even-keeled but still the unhappy owner of my excess 10-12 pounds: and he gently suggested that we spend part of the session downloading and setting up a food diary app called “MyFitnessPal.”

It was annoying! I didn’t want to do this! ANOTHER thing to be responsible for, keep up with, write stuff in? Gah! I balked mentally, but did as he said – and committed to documenting every single thing I ate/drank for a week.

And surprise, surprise – the act of keeping the diary has already CHANGED MY BEHAVIOR. I spend many days working at home, and so when I take a break I almost always end up in the kitchen. I’ll grab something to eat – something good in accordance with Ian’s low-carb plan (a handful of almonds, some plain yogurt) – and go back to work. The key here is that what is triggering my eating is NOT HUNGER – but instead simply habit. In these situations I’m generally not at all mindful of whether I actually NEED to open up the fridge; I just do it automatically. (Because I am human and my mind is EASILY controlled – see Brendan’s hilarious musical THE BEHAVIOR OF BROADUS for more on this.)

But now, with MyFitnessPal, I have to make a conscious DECISION about whether to eat something – is it worth the trouble of documenting it in the app? Do I actually need this food right now? And more often than not, over the past few days, the answer is no. And I am much more attuned to actual hunger cues. SO SIMPLE – and yet I resisted and resisted and resisted until now.

Part 2 – Attention must also be stood at

Another thing I’ve long known the benefits of but never actually applied to my own self: the STANDING DESK. For years it’s been proven that sitting for extended periods is horrible for our health. We hunch, we lose our core strength, we overeat, we are at increased risk for heart attacks and cancer…and the latest from the American Journal of Preventive Medicine (in a new study specifically of women) is, too much sitting is linked to EARLY DEATH. Yes, you read that right. DEATH.

I don’t know why it’s taken me so long – but I’ve always given myself the following two stupid excuses: 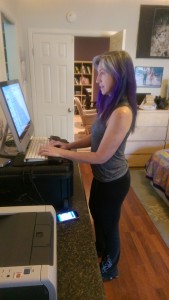 The additional benefit of this is, more space in between my desk and the bed. The whole room is more airy.

It is true that as soon as I have a gig (coming up in November for SHACKLETON backers’ auditions, and then my Just Getting Good solo concerts December 11-13), I’ll need to USE the road case and come up with something else – but now I’m in the standing habit and I must tell you, I LOVE IT. My feet get a bit tired by the end of the day, but I feel so much better aligned and energetic – and if I’m going to risk an early death, at least it won’t be from something as completely idiotic and avoidable as PROLONGED SITTING at my own desk.

(Latest workout with Ian – 4 sets of the following circuit:

This entry was posted in Uncategorized and tagged fat loss, sitting, sociology. Bookmark the permalink.

2 Responses to It’s all about the science (oversharing #5): attention must be paid, and often stood at.