returning to Boston after a goodly long time 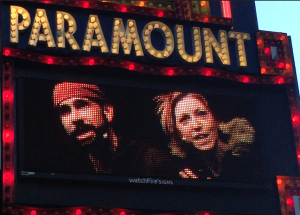 Wade and me on the marquee screen

It is really interesting being back in Boston. I lived here a quarter of a century ago, and spent a while studying songwriting in a building only steps away from where I’m staying right now on Boylston Street, overlooking the Common.

I moved to Boston after college with two vague ideas: 1 – I wanted to play my violin, but not in a classical setting, and 2 – I wanted to sing and write songs. I took some courses at Berklee, and then studied for a while with a renegade Berklee professor who taught on his own in the Steinway Building. I didn’t really have any clear idea of what I was doing, and felt like I should have backup plans in case music didn’t work out…and so I tried to keep all possible doors open, staving off the pain and risk of full commitment. The perfect solution to my parents’ worry about my being a musician? Take a job at the Princeton Review, and teach courses for EVERY graduate school admission test: GRE, GMAT and LSAT. At any moment, I could switch gears and apply for grad school (or med school or law school)!

I ended up with an absurd triple life, in addition to the music classes. I simultaneously: held down my first “real” job (as Director of Graduate Programs at the Princeton Review,  I self-importantly carried around a beeper but hardly ever responded to it); played at big suburban rock clubs in a cover band 4-5 nights a week (my big numbers were “Straight Up” by Paula Abdul and “Black Velvet” by Alannah Myles); and dragged my sleep-deprived self to Army National Guard duty one weekend a month (where my main duties as the assigned Fitness Officer were: getting up really really early, writing award letters about people I’d never met, and measuring corpulent soldiers with calipers). I lived in a blur of test scores, big hair and saluting…and it wasn’t until my unit was short-listed for mobilization to the Gulf War that I looked up and realized I needed to make a change. I was perpetually exhausted, unhealthy and going in a million directions at once; and when it turned out my unit was NOT actually being mobilized to Iraq, I realized it was time to leave Boston anyway. I moved home to Virginia to collect myself and figure out my next move.

It has taken me twenty-five years to return to this fascinating city…and now that I’m here with ERNEST SHACKLETON LOVES ME, working on this transformative story of courage and hope in the gorgeous Paramount Theatre at ArtsEmerson, I realize something important. Every time I have held back from following my heart and instead chosen a direction because of fear or worry (e.g. taking a full-time job in test prep JUST IN CASE), I’ve ended up having to rethink my “safe” choice. I knew in my heart when I *first* moved to Boston that I wanted to play violin and write songs – and here I am, doing exactly that all these years later – but I’ve had so many unnecessary existential crises along the way. I think that when I was in my twenties (and thirties), I had this feeling that every decision was FINAL – and so I worried and worried all the time, trying to keep all doors open in case I changed my mind sometime in the future. Now I realize that ALMOST NO decision is final – if you end up making a wrong choice, you can SIMPLY COURSE-CORRECT – and that is incredibly liberating.

Ernest Shackleton knew this – and I think it’s a big reason I’m so drawn to his story. Whenever anything went wrong (like when his ship was crushed in the ice and destroyed), he would simply make a new goal (survival!).

If I could, I would tell my younger self not to worry, not to waste energy on what-ifs and endless backup strategies. As it is, I’m incredibly happy I have had the life I’ve had so far; it’s made me into the person I am now, and I like her just fine.

But now I’m older, and I have a new goal. I’m heading off into the great unknown, and I’m not making any contingency plans.

This entry was posted in Uncategorized. Bookmark the permalink.

6 Responses to returning to Boston after a goodly long time